Epidemiological Patterns of Gestational Diabetes by Person, Place, and Time

Don't use plagiarized sources. Get Your Custom Essay on
Epidemiological Patterns of Gestational Diabetes
Just from $8/Page
Order Now 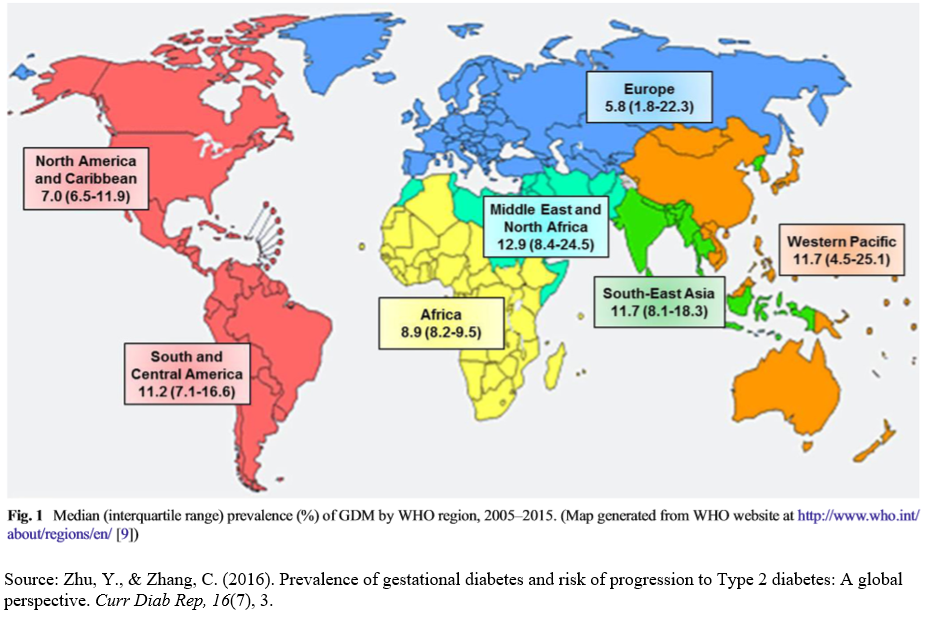 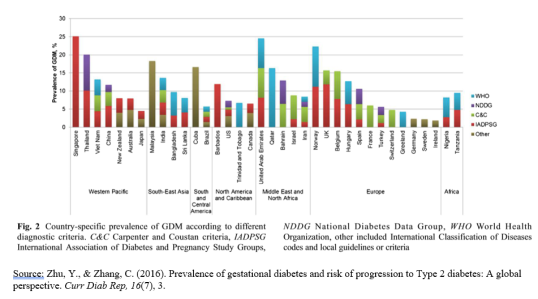 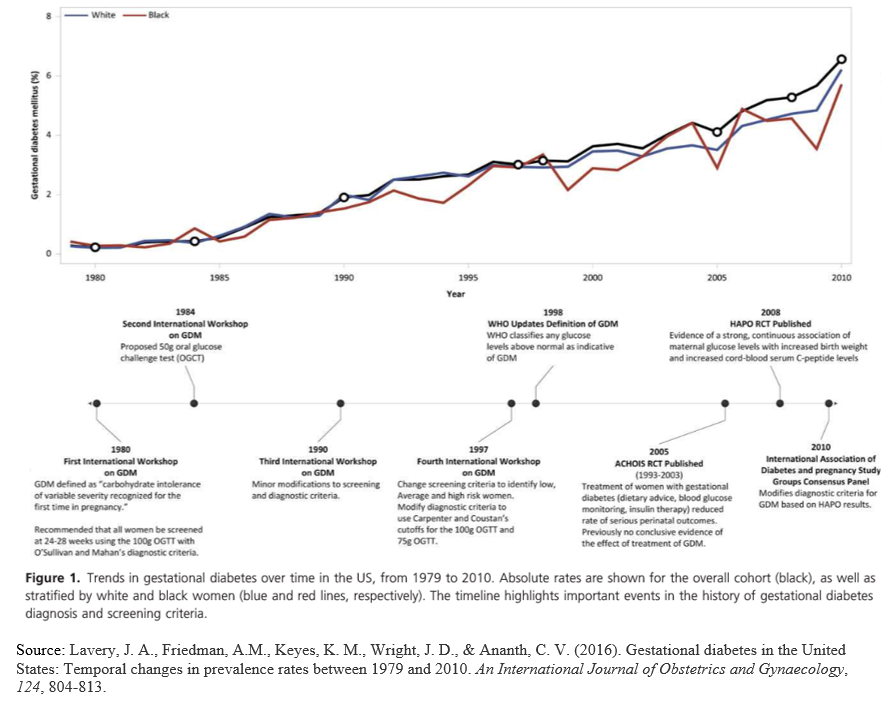 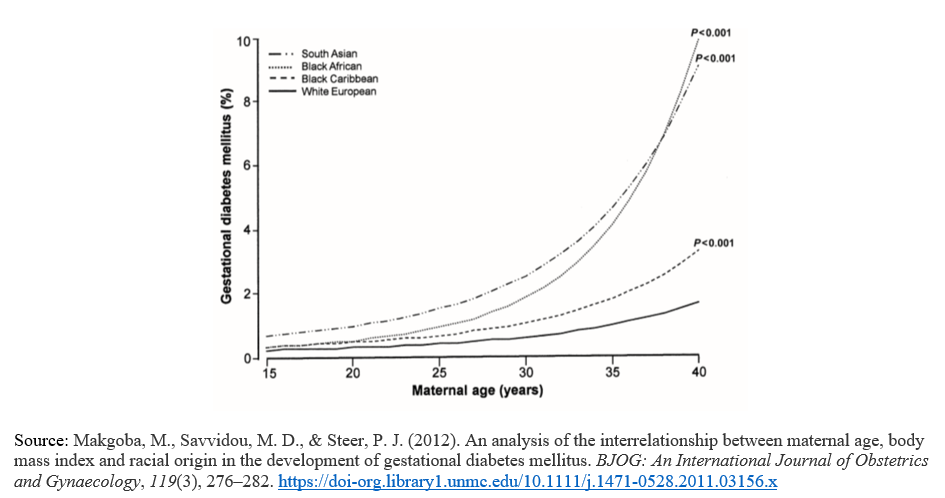 There have been many prevention and control measures that have been studied in regards to gestational diabetes. The Centers for Disease Control and Prevention (2018) offers many prevention and control tips for women at risk for or who have gestational diabetes. These tips include eating healthy foods which may include getting help from a registered dietician, exercising regularly to include at least 30 minutes of moderate-intensity exercise at least five days per week, monitoring blood glucose levels as directed by a practitioner, taking insulin if prescribed, and getting tested for diabetes mellitus following pregnancy. There is also current studies to determine if probiotics and vitamin D help aid in the prevention of gestational diabetes (Poomalar, 2015). Women who with a past history of gestational diabetes should work on future prevention prior to subsequent pregnancies through the methods mentioned above.

In conclusion, gestational diabetes is becoming an increasing global health risk. It is a health condition that may affect any women of childbearing age who is pregnant, plans to become pregnant, or has been pregnant. It may also impact a developing fetus as well as an infant born to a mother who had gestational diabetes during that pregnancy. Gestational diabetes occurs worldwide, though there is a higher prevalence in some ethnicities than others (as mentioned previously). There are many risk factors that may predispose women to develop gestational diabetes and fortunately, there are also many prevention and control measures to reduce these risk factors. More work will be needed in public health outreach to helping women become more aware of these risks as well as the implementation of primary prevention measures to decrease the incidence of this condition worldwide.


Centers for Disease Control and Prevention:

The Centers for Disease Control and Prevention has ample information available regarding public health diseases including gestational diabetes. There is data available about rates, prevention measures, risk factors, and numerous other information sets regarding gestational diabetes on this site. The CDC uses the National Notifiable Diseases Surveillance System (NNDSS) to gain information from local and state health departments. The strengths of using this source are that this is information obtained from the CDC is reliable and lacks the bias that some research studies or other internet sources may have. I used this data source because it was helpful in that the CDC sets primary prevention measures which fit well into my rationale for prevention and control measures for gestational diabetes. I also enjoy the CDC data because it is at a level that individuals that do not have public health or medical background can understand. This is imperative due to the fact that the CDC sets many guidelines for disease and illness prevention.

This is a research article that I obtained through EBSCO (UNMC library) which talks about the prevalence and risks of gestational diabetes. This is a retrospective cohort study from 2016. The strengths of this research article were that it was clear and concise, had no outside funding which helped to ensure that bias is limited, and this study used a cohort of women with many different variables (varied ages, races, marital status, etc.). This study was also from a peer-reviewed journal (

BJOG: An International Journal of Obstetrics and Gynaecology).

However, this study did not disclose interests or limitations. I chose to use this research article for my project because it had great evidence-based recommendations and used epidemiologic patterns and definitions that I could understand. This article also had a lot of interesting information regarding maternal trends related to gestational diabetes which were actually hard for me to find from many of the other sources. Lastly, I used the figure from this study because it did a great job at comparing different races of women with gestational diabetes, but also had a timeline of why the rates of gestational diabetes rates are increasing over time.

This is a research article that I obtained through EBSCO (UNMC library) and is a retrospective study from 2012. This study looked at multiple factors in relation to gestational diabetes which includes maternal age, body mass index (BMI), and race of the mother. This study was from the same peer-reviewed journal as the previous study I mentioned (

BJOG: An International Journal of Obstetrics and Gynaecology

). The strengths of this research article were that the data collection methods were very clear, statistical analysis was done in a way that I could clearly comprehend, there was no outside funding source limiting bias, and I liked that the results were depicted in a linear fashion. I also liked that this study looked at BMI in with maternal age and race in that high BMI’s correlating to overweight and obesity do have a large role in gestational diabetes development. A limitation of this data source was that it was retrospective so data was collected from women who were self-reporting these factors and this may lead to inconsistency with screening. I chose to use this data because I liked the data and how there was a combined link between the factors of maternal age, BMI, and maternal race. This helped me in realizing that there are multiple factors often acting in conjunction in the development of diseases including gestational diabetes.


National Institute of Diabetes and Digestive and Kidney Diseases:

The National Institute of Diabetes and Digestive and Kidney Diseases is a program funded by the National Institute of Health (NIH) which conducts medical research regarding endocrine and metabolic disorders inclusive of gestational diabetes. This data is available to the public and has an aim to increase knowledge and understanding of endocrine and metabolic disorders. The strengths of this data are that this information is reviewed by experts (much like the data from the CDC), the aim is to help the general public so the information is easy to read and understand, and there is a wealth of great information regarding gestational diabetes. A limitation of this source is that often the data has to be written at a level the general public can understand (general rule is fifth-grade level), so there is not a lot of statistical data for this source. I chose to use this source because of the data regarding testing for gestational diabetes. I am currently pregnant and the information that is given on this site is the same information that I was given in a handout by my midwife.

as well as the fact that this article was peer-reviewed.